Vitamin E works within the cell membrane as a biological antioxidant and may prevent premature destruction of RBC in Glucose 6-phosphate dehydrogenase (G6PD) deficient hemolytic anemia. Changes in some of the hematological variables like hemoglobin (Hb) concentration, total count (TC) of RBC, packed cell volume (PCV) and reticulocyte counts may occur due to hemolysis of RBC in G6PD deficiency In the present study the role of vitamin E supplementation on these changes were observed in reducing chronic hemolysis in anemic patients with glucose 6-phosphate dehydrogenase (G6PD) deficiency For this, a total number of 102 subjects with age ranged from 5 to 40 years of both sexes were included in the study Among them 68 were G6PD enzyme deficient patients, of whom 34 were in supplemented group (experimental group) and 34 were nonsupplemented group (control group). The supplemented group received vitamin E supplementation for 60 consecutive days at a dose of 800 IU/day for adult and 400 IU/day for children 5. 12 years (in a divided dose i,e. 4 times daily). Age and sex matched 34 apparently healthy subjects with normal blood G6PD level were taken to observe the baseline data (healthy control) and also for comparison. All the G6PD deficient patients were selected from Out Patient Department (OPD) of hematology, Bangabandhu Sheikh Mujib Medical University (BSMMU), Dhaka, Bangladesh during the period of July 2005 to June 2006 and all the healthy subjects were selected from personal contact. Blood G6PD level, Hb%, TC of RBC, PCV, reticulocyte count and serum bilirubin level of all subjects were measured by standard laboratory techniques. All the parameters were measured on day 1(one) of their 1st visit forall the groups and also were on day 60 in deficient group. Data were compared among the different groups, also in supplemented group just before and after supplementation. Analysis of data was done by appropriate statistical method. Mean blood Hb%, TC of RBC and PCV were significantly lower but reticulocyte count and serum bilirubin levels were significantly higher in patients suffering from hemolytic anemia due to G6PD deficiency in comparison to those of the healthy control. After supplementation with vitamin E (i.e. on day-60) Hb concentration, total count of RBC, PCV were significantly increased whereas, reticulocyte count and serum bilirubin levels were significantly decreased towards those of healthy control in supplemented group of patients in comparison to those of their pre-supplemented (day-1) and non-supplemented groups both on day-1 and day-60. Therefore, from this study it may be concluded that, deterioration of some of the hematological parameters occur in G6PD deficient hemolytic anemic patients, improvement of which occur following vitamin E supplementation, which clearly indicates the role of this antioxidant vitamin in reducing the rate of hemolysis in this group of patients. So, vitamin E supplementation can be considered along with other drugs to treat this group of patients. 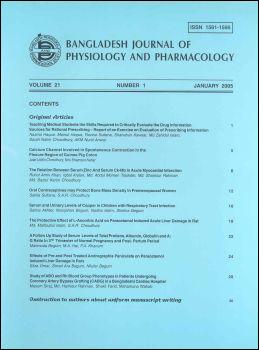