<i>Wolbachia</i>-mediated reproductive alterations in invertebrate hosts and biocontrol implications of the bacteria: an update

Wolbachia are obligatory intracellular bacteria that have evolved to manipulate reproduction and/or metabolism of their arthropod and nematode hosts in a number of ways, all designed to the benefit of their own survival and transmission through hosts populations. An updated account of the occurrence, identification, phylogeny and genetics, phenotypic effects, distribution, mechanisms of action, horizontal transmission, infection dynamics, evolutionary consequences and biocontrol implications of the bacteria are presented. Associations between these maternally heritable bacteria and their hosts not only cover the entire range of interactions from parasitism to mutualism but also a complex interplay of both. Wolbachia are transmitted vertically from mothers to offspring, and also horizontally within or between arthropod taxa. They are known to induce cytoplasmic incompatibility (CI) via unviable brood, parthenogenesis induction (PI) through asexual reproduction, feminization (F) by converting males into functional females, and male killing (MK) by causing death to sons of the infected mothers. How these bacteria influence host fitness and population dynamics, and could play an important role in speciation have been reviewed. Possible uses of the bacteria and their predominant phenotypes in control programmes for agricultural pests and human disease vectors have been discussed. Key words: Wolbachia, reproductive manipulation, cytoplasmic incompatibility, parthenogenesis induction, feminization, male killing, biocontrol implications Univ. j. zool. Rajshahi Univ. Vol. 26, 2007. pp. 1-19 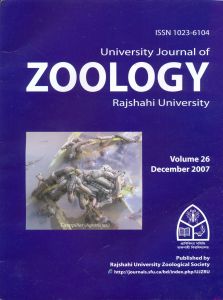