Results: Mean age of the respondents was 30.16±5.09 (range 20-  41) years where about 60% were married.Most (91%) of  themcompleted secondary school certificate. Eightypercent (80%)  lived in barracks and 97% had idea about dental diseases and 3%  had not.Of all, 73% respondents brushed their teeth once daily and  27%, twice daily.Majority(76%)respondents brushed their teeth at  morning and the lowest 11% after breakfast and the rest (13%)  brushed their teeth at bed time.Ninety nine percent(99%)  respondents used tooth paste as cleaning materials and only 1%  respondents used something else.In this study, 40.0% visited dentist  once in a year, 17% twice in a year and 43% did never visit dentist  without dental problem. Usually48% visited dental chamber for gum  bleeding and only 1%visited for regular dental checkups. Among the  respondents, 36% visited dental chamber for pain and 15% visited  dental chamber for detection of dental caries by themselves. The  notable bad habits were not observed among 84.0% of the  respondents. A few respondents had smoking (6.0%), betel nut  chewing (4.0%) and snuff dipping (3.0%)habits. Of all,63% of the  respondents had swelling of gum and 37% had no swelling of gum.  Presence and absence of calculus on the gingival margin were found  47% and 53%, respectively. In view of individual perspective,2DMFT  had among 40.0% respondents, followed by 1DMFT, 29%,  4DMFT,12%, 3DMFT, 3.0% and 16% respondents had no DMFT.

Conclusions: Overall findings suggest that the factors that affect  the oral health were smoking, frequency of tooth brushing, having  some bat habits and visit to dentist when dental symptoms such as  bleeding gums or toothache occurred. Clinical factors included  bleeding and swollen gums, toothache and caries. 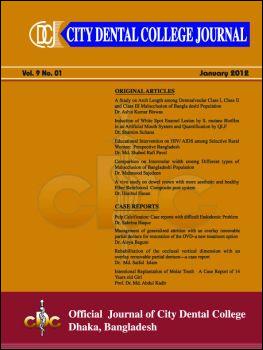