The main focus of the study was to assess the extent of perception level of potato growers towards the potato production technologies. The study was carried out in the Rajshahi district which is considered as a part of the northwest area of Bangladesh. Two hundred thirty-two farmers were randomly selected as potato growers for data collection from twenty villages under the Upazilla namely, Mohonpur, Bagmara and Durgapur of Rajshahi district. A pre-tested interview schedule was used to collect the data from the respondents in July 2010 to February 2011. For measuring the perception of modern variety potato production technologies by the potato growers, 11 technologies for modern variety potato production were considered. Descriptive statistical measures such as number, percentage distribution, range, mean, standard deviation and coefficient of variation were used in describing the variable. More or less similar percentage (37%) of the growers had medium and high perception whereas 26.29 percent low perception. Analysis indicated that among the extent of perception of modern eleven technologies use of quality seed was at top highest ranking by the perception adoption index of 253.88, whereas plant spacing was bottom lowest. The perception variations in different technologies will not be improved unless intensive and effective steps are taken to increase growers access to various information sources of agriculture which increase the knowledge and then perception. 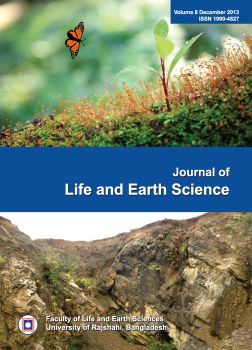 It is a condition of publication in the Journal that author(s) assigns copyright to the Faculty of Life and Earth Sciences, University of Rajshahi, whose permission must be obtained to reproduce there from. This would ensure efficient handling of reproduction of articles for third party requests and wide dissemination at large.