Methods: A total of 164 paediatric patients aged 1 month to 14 years admitted from January 2007 to December 2009 were consecutively included in the study. Diagnoses were made on clinical grounds and laboratory investigations. Some patients (n = 30) underwent biopsy as well. Diagnoses were classified into four broad categories like infective, metabolic, congenital and idiopathic liver diseases. Outcome of the patients were classified as cured, improved, discharge on request (DOR), leave against medical advice (LAMA) and death.

Result: The mean age was 4.8 ± 0.3 years and the lowest and highest ages were 5 months and 14 years respectively male to female ratio was roughly of 3:2. Two-thirds (67.1%) of the children belonged to poor social class and 25% to middle class. Broader classification the diseases demonstrated that 66% children had infective hepatitis, 15% idiopathic diseases, 10% metabolic/storage and 9% congenital liver diseases. Specific diagnoses showed that over half (53%) of the cases had acute viral hepatitis, about 8% neonatal hepatic syndrome (NHS) and 6.1% fulminating hepatic failure (FHF). Wilson’s disease, storage disease, liver cirrhosis and biliary atresia were less common. Over 70% of the children improved with treatment and 2.4% died. Older children were more prone to have infective, metabolic and idiopathic liver diseases (p < 0.001). Sex and socioeconomic status were not found to be associated with liver diseases (p = 0.757 and p = 0.487 respectively).

Conclusion: Overall, the prime cause of liver disease in older children of our country is infective (viral hepatitis) Age is a determinant of types of liver disease. But sex and socioeconomic status did not prove so. 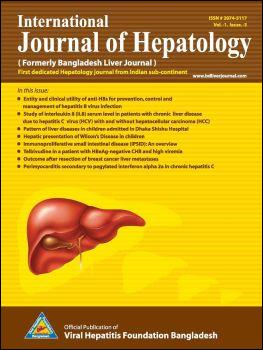